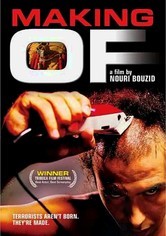 2006 NR 2h 0m DVD
When the U.S. invades Iraq in 2003, a break-dancer's (Lotfi Ebdelli, with a Best Actor win at the 2007 Tribeca Film Festival) dreams of leaving Tunisia for a more glamorous life in Europe come to a grinding halt, leaving him vulnerable to the advances of a fundamentalist group in search of a suicide bomber. Writer-director Nouri Bouzid helms this Tribeca winner for Best Screenplay, an inventive film that's part drama and part fictional "documentary."