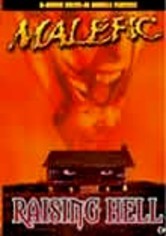 2003 NR 2h 37m DVD
Writer-director Steve Sessions serves up the first entrée of this double feature, Malefic. A couple (Sequoia Rose Fuller and Jonathan Watts Bell) fall prey to the bloodlust of a mysterious being lurking in the shadows, and their death haunts a foursome 16 months later. In Raising Hell, a local politician and his henchman wield their evil however and whenever necessary, which turns out to be often for them. Are they truly unstoppable?