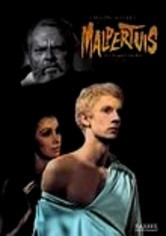 1971 NR 2 discs
Orson Welles portrays an enigmatic and tyrannical patriarch in this surreal tale from Belgium. A young sailor, Jan (Mathieu Carrière), returns to shore and finds himself in the labyrinthine mansion of his dying uncle Cassavius (Welles). But things aren't as they seem. As Jan begins to unravel the mysteries his uncle hides, he learns some terrifying secrets. Based on the novel by Jean Ray, Malpertuis was nominated for the Palme d'Or at Cannes.