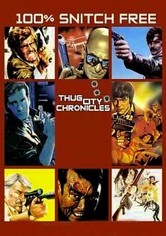 1972 NR 6h 18m DVD
Mobsters, hit men, robbers, drug dealers and pimps fill this quadruple bill of Italian crime films, beginning with Man Hunt, in which a small-time Milan crook (Mario Adorf) must prove his innocence while being pursued by two New York hit men (Woody Strode and Henry Silva). The action also includes a Mafia family battle in The Boss, an ex-con chased by the mob and the cops in Milan Calibre 9, and a chilling portrait of juvenile criminals in City Rats.