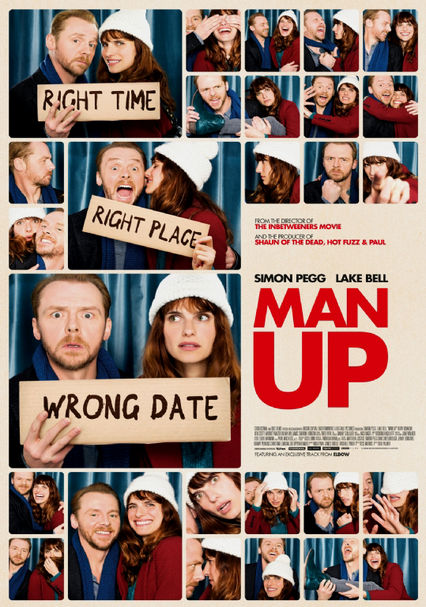 2015 R 1h 28m Blu-ray / DVD
In a romantic turn of fate, perennially single Nancy is standing under a train station clock when a stranger named Jack arrives and mistakes her for his blind date. Sensing an opportunity, Nancy decides to go with the flow to see where things lead.

Parents need to know that Man Up is a romcom that mostly takes place over the course of one long, alcohol-soaked afternoon and evening in London. The main characters (played by Simon Pegg and Lake Bell), spend the day flirting, drinking, arguing, drinking, and eventually falling for each other -- over drinks. Expect a lot of swearing (including "s--t," "f--k," and more) and some pretty graphic conversations about sex (including discussion about giving and receiving oral sex), though very little actual physical contact beyond kissing.

Some kissing, and many sexual references, including graphic discussions about sex, sexual positions, giving and receiving oral sex, and more.

Love is out there, even for people who are convinced they'll never meet someone who really appreciates them.

The main characters have iPhones; brief mention of one character's iTunes account.

A lot of drinking. The main character sometimes drinks alone to ward off loneliness and to steel herself for potentially nerve-wracking activities; when she socializes with a blind date, they spend much of the evening drinking beer and hard liquor (it's surprising that they only seem to get moderately tipsy).