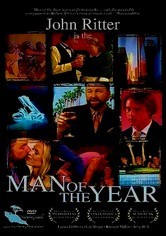 2002 UR 1h 30m DVD
Written and directed by Straw Weisman, Man of the Year centers on the events at a party thrown to honor Bill, the successful head of a large energy firm. On the outside, Bill is the quintessential "man of the year" but it turns out he has many dark secrets. As the evening unfolds, relationships are strained, friendships falter and tempers rise; at the center of it all is Bill, whose carefully constructed life begins to crumble.