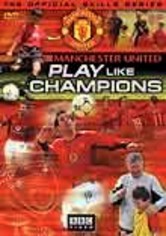 2003 NR 1h 52m DVD
When it comes to soccer, Manchester United is one of the most popular and successful teams around. This special release features Sir Alex Ferguson as host and some of Manchester United's best as they show off what it takes to be a professional soccer player. Get ready for a one-of-a-kind tour of their stadium, as well as tips for soccer players young and old. Learn tricks such as the Flick Behind, the Roller Coaster, the Step Over and much more.