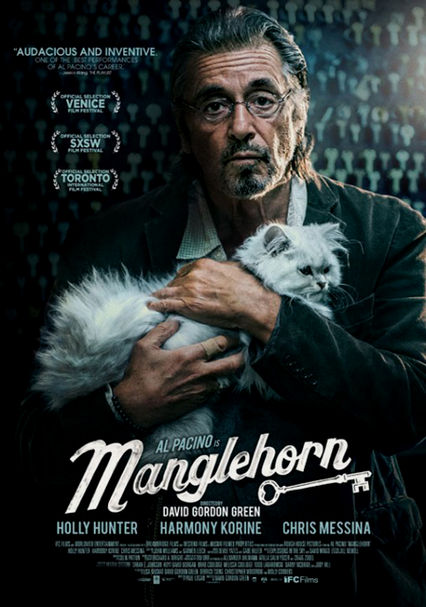 2015 PG-13 1h 37m Blu-ray / DVD
Living only with his cat, brooding locksmith A.J. Manglehorn remains in a rut, penning endless letters to his idealized lost love. Given a chance for new relationship with a cheerful bank teller, A.J. faces a choice between the past and the present.

Parents need to know that Manglehorn is a character study that focuses on a lonely old man (played by Al Pacino) who can't seem to get over the one great love of his life. Expect quite a bit of drinking (often to the point of drunkenness); the main character also smokes cigarettes. There's occasional swearing ("s--t" and "goddamn") and some heated, emotional encounters, as well as scenes depicting the aftermath of a car accident -- including people injured and some who may be dead -- and surgery on a cat. A character is solicited by a prostitute after accidentally going into a brothel, and a naked backside is briefly visible in the background. A gun is used to shoot empty bottles.

A character accidentally finds himself in a brothel and storms out in an angry huff after a prostitute solicits him. Another man's naked backside is briefly visible in the background.

Aftermath of a multi-car accident, including injured people lying on the ground and some people who may be dead. Close-up shots of a cat having surgery. Two men get into a physical altercation that leaves one on the ground. Main character sometimes shoots empty bottles with a gun.

Love and connection are important and should be valued. It's worth trying to salvage a damaged relationship by figuring out where you went wrong and how you can correct it.

The main character smokes cigarettes frequently and often gets drunk alone. He drinks whisky at home, has more drinks while gambling alone in a casino, and sometimes goes to bars.