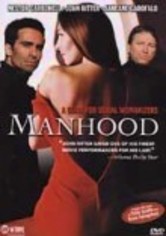 2003 R 1h 22m DVD
In this sequel to Jack the Dog, Jack's (Nestor Carbonell) world spins out of control when his sister Jill (Janeane Garofalo) runs off, leaving him in charge of her unruly teen Charlie, who begins to corrupt Jack's son. Jill's unstable ex-husband, Eli (John Ritter), moves in, and even worse, Jack's ex wants custody. But it's not until Eli loses complete control that Jack makes the ultimate sacrifice. Bonnie Bedelia and Tom Arnold also star.