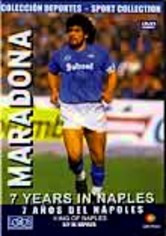 2006 NR 1h 0m DVD
The Italian city of Naples &NFiloves&NFi_; soccer player Diego Maradona -- so much so that many Neapolitans keep his picture at their bedside. This collection of previously unseen footage and action-packed highlights from Maradona's most memorable games shines a spotlight on the controversial Argentine athlete (known as "El Pibe de Oro" or "The Golden Boy") who led team Naples to win the national championship.