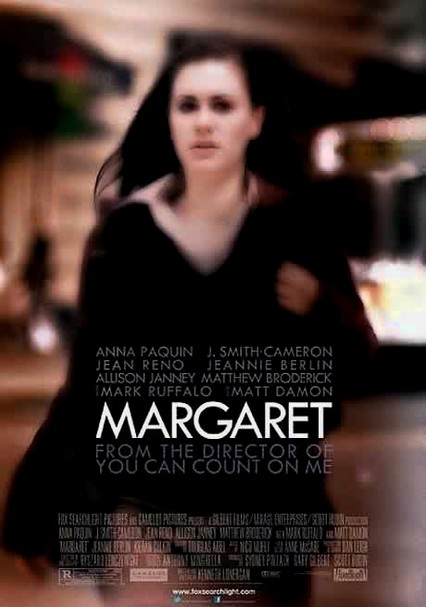 2011 R 2h 30m Blu-ray / DVD
After witnessing a fatal bus crash, a young woman comes to believe that she inadvertently played a part in the tragedy. As she tries to deal with her feelings, she becomes emotionally abusive to those around her, and to herself.

Parents need to know that this meandering drama about what happens to a 17-year-old after she witnesses a horrible bus accident depicts a pretty stark, often depressing existence. Fathers are absentee, teenage boys aren't faithful, mothers are narcissists. It's pretty heavy material for tweens and teens who may be fans of star Anna Paquin and is more appropriate for older teens and adults. Look for references and scenes depicting smoking (the main character smokes like a chimney -- not just cigarettes. but marijuana too) and drinking among teens. Sex acts between teens and a teen girl and an adult are implied from movements, plus there's adult breast-baring. There's also some swearing, including "f--k" and "c--t."

A high school girl loses her virginity to a guy with a girlfriend; they're shown groping in the dark, and her breasts are sort of visible. She's also shown performing a sex act -- no nudity, but her movements hint at what she's doing -- on a teacher. A woman is shown pleasuring herself (again, no nudity, but it's pretty clear what she's doing); later, she stands bare-breasted in front of a mirror as her lover awaits. Teenagers make out.

The bus accident in the beginning of the movie (which propels the rest of the story) is graphic, bloody, and protracted. A woman's severed leg is visible; she dies a slow and sad death, unable to see or make sense of what has just happened to her. Later, characters scream and yell at each other, call each other names, and throw objects in anger.

The movie's message is that the truth matters, even if it's difficult to cop to it. Not doing so can eat at you and change you in both small and significant ways.

Teens smoke weed and drink beer at parties and at home; a guy shows a girl how to snort drugs. Social drinking in restaurants.