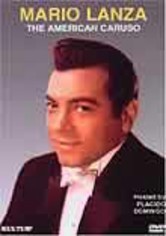 1986 NR 1h 10m DVD
Plácido Domingo hosts this tribute to American tenor Mario Lanza. Interviews, rare footage and vintage recordings chronicle Lanza's life from his Philadelphia childhood to his meteoric rise as an opera singer and film actor and his tragic death. Credited with bringing opera and classical music into the home of everyday Americans, Lanza starred in That Midnight Kiss and The Toast of New Orleans and portrayed Enrico Caruso in The Great Caruso.