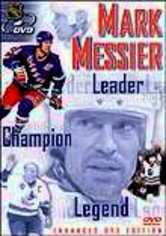 2000 NR 0h 50m DVD
This 2000 documentary follows the stellar career of National Hockey League Hall of Famer Mark Messier, from his prodigious bantam league days in Canada to superstardom when he piloted the New York Rangers to the Stanley Cup after a 54-year drought. Combining interviews with Messier's family members and ex-teammates -- including Wayne Gretzky -- plus an array of spectacular game footage, the film paints a vivid portrait of the hard-hitting center.