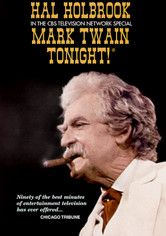 1999 NR 1h 30m DVD
Hal Holbrook re-creates for the screen his widely acclaimed stage monologue as Mark Twain, noted American humorist and author of the classic novel The Adventures of Tom Sawyer. The screen actor's award-winning portrayal is considered the quintessential model for one-man theatrical performances. Holbrook has been performing as Twain for more than 40 years, calling upon an archive of memorized material rather than a predefined script.