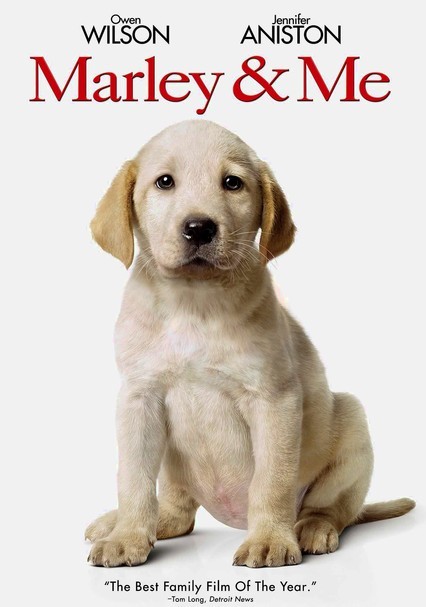 2008 PG 1h 50m Blu-ray / DVD
Jennifer Aniston and Owen Wilson star in this big-screen tearjerker based on a best-selling memoir as a newly married couple who, in the process of starting a family, learn many of life's important lessons from their trouble-loving retriever, Marley. Packed with plenty of laughs to lighten the load, the film explores the highs and lows of marriage, maturity and confronting one's own mortality, as seen through the lens of family life with a dog.

Parents need to know that although the lighter side of this family-targeted dramedy was played up in the initial marketing campaign, it tackles serious themes like loss and mourning. While Marley's rambunctious antics will certainly amuse kids, there's some emotionally challenging material here. On the up side, there's not a lot of other problematic content; language is mild ("ass" and "damn") and sexuality is more implied than shown, though the characters do discuss topics like getting pregnant, and there's one nude swimming scene (but nothing much is on display).

Though no sexual activity is explicitly shown, it's implied, especially in a creaky bed at an Irish inn. Content relating to reproduction (getting pregnant, miscarriage, birth control) might be too mature for younger viewers. Some shots of women in bikinis on the beach; a supporting character has lots of lecherous maneuverings. Jenny swims seductively in the nude, enticing John to collect his "birthday present." Marley humps the dog trainer's leg.

Marley's out-of-control behavior isn't violent, per se, but he wreaks havoc wherever he goes. A neighbor has been attacked in one scene -- viewers don't see the violence, but she suffers a knife wound, implying the violence that befell her.

Predictable for a dog-centric movie: "crap" and "poop." Other language includes "ass," "damn," and "goddamn."

Shows the challenges of caring for and training a high-maintenance pet and how it can bring out the worst in some people, but also how difficult situations can bring families together.

Jenny and John pursue the American dream: a nice house in a good neighborhood, a nice car, a big trip, etc. But the pursuit is also a struggle, and viewers see how John and Jenny sacrifice to gain the material pleasure that they eventually achieve. Specific products/brands shown/mentioned include Volvo, the Philadelphia Enquirer and the New York Times.

John mentions having taken bong hits in his youth. John and Sebastian usually bond over a beer. Parties involve drinking wine or champagne.