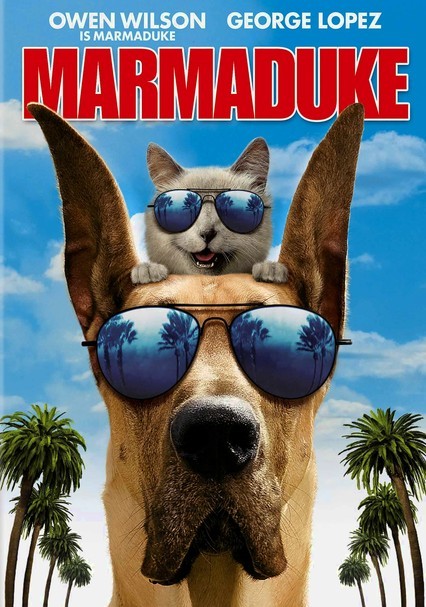 2010 PG 1h 28m Blu-ray / DVD
When Phil and Debbie Winslow (Lee Pace and Judy Greer) relocate from their native Kansas to the sunny climes of Orange County, their big-hearted, havoc-wreaking Great Dane (voiced by Owen Wilson) gets a taste of the dog's life, California-style. Featuring the voices of Emma Stone, George Lopez and Steve Coogan, this family comedy blends live action and computer animation to bring the-beloved, if slobbery, comic-strip mutt to life.

Parents need to know that Marmaduke is mostly inoffensive, unless your family detests potty humor, in which case this isn't the movie for you. The main issue with any talking-animal flick is the degree to which the animals are stand-ins for humans, and in this case, the animals are made to seem like high-schoolers with all their accompanying social and romantic drama. There's a lot of romantic pining and even doggie dating and flirting, which may go over the heads of kids too young to understand the nuances of romance. Some subtle drug references pop up that will also bypass the kids' radar. The language is limited to insults like "freak," "stupid," and "loser," and mimics the bullying and teasing you'd find in a movie about unpopular students. For such a short movie, there are several positive messages about the importance of honest, unconditional friendship and family versus work time -- not that they'll necessarily get noticed with all the dog-fart jokes in the way.

The dogs behave like teenagers in the way they flirt with each other and discuss the opposite sex (romance, dating, being with another dog). Marmaduke takes Jezebel on the "dream date" described to him by Mazie. Jezebel, a pedigree, talks about going for "the top dog." There are camera shots that make it look like the dogs are staring romantically at each other.

A mean Alpha Dog named Bosco, and a "notorious" rabid dog called the Chupadogra are menacing and growl. The dog park yells "fight, fight" when they think Marmaduke is going to challenge Bosco and vice-versa. Lots of Marmaduke-caused mishaps cause some property damage to his family's house. A broken water main puts Marmaduke, Mazie, and Phil in harm's way.

The "pedigree crowd" throws around a lot of insults and taunts like "donkey," "horse," "losers," "stupid mutts," "freak," "gargantuan spas," and more. Also, one or two uses of "God" as an exclamation.

There are several positive messages in the movie, chief among them the importance of staying true to yourself and not lying just to impress others. The meaning of unconditional friendship and work-life balance are explored in the relationships Marmaduke has with his original friends and his owners.

Brands featured include Apple's Macbook, the television show The O.C. and its theme song, and a Mini Cooper car.

There's no actual alcohol or drug content in the movie, obviously, but one of the dog cliques is the "mushroom heads," which is a pretty overt reference to pot smokers (they're even wearing tie-dyed outfits). Later in the movie, the alpha dog's behavior is excused because he's been drinking water from a drain pipe and dogs drinking from a toilet are encouraged by a crowd yelling "Chug! Chug! Chug!"