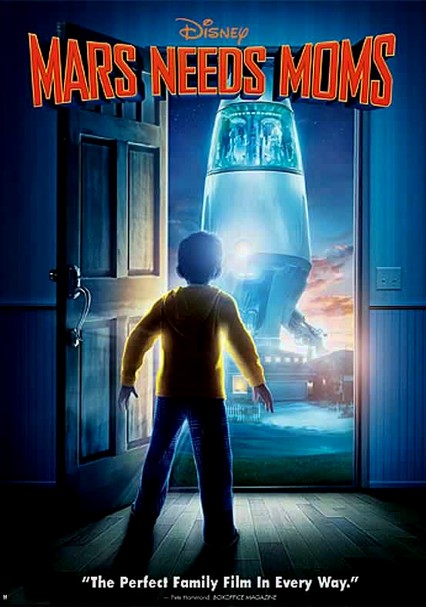 2011 PG 1h 28m Blu-ray / DVD
After tormenting his sister and refusing to eat his veggies, Milo lands in big trouble and starts viewing his mom as uncaring and unfair. But when Martians suddenly abduct her, Milo rushes to the rescue and discovers why all moms are so special.

Parents need to know that this animated 3-D adventure comedy based on the book by Berkeley Breathed is occasionally frightening -- and scenes in which it looks as though the Mom character has died could be quite upsetting for younger viewers -- but it has a very strong message about unconditional love. Because the animation is based on motion-capture technology, some of the tenser scenes (chases, a near execution, close calls with death) seem more realistic and may affect younger kids more than regular computer-generated animation. Expect a few insults ("stupid," "idiot," etc.) and very mild flirting between a female alien and a man who's grown up on Mars. Moms will particularly appreciate the movie's biggest take away: Even when they nag kids to do their chores or send them to bed without a treat, moms love their kids and would do anything to ensure their safety.

Flirting between Gribble and Ki. Gribble keeps blushing in her presence; at the end, they embrace, and she gives him a peck on the cheek.

Young kids may be upset to hear that Mom will be killed once her parenting skills are extracted to program the Nanny Bots. And at one point, it looks like she has actually died, which could be more disturbing. The Martian ladies, especially the Supervisor, are an imposing, menacing bunch, and the Supervisor always looks and sounds like she's giving mean orders. Gribble is nearly executed by firing squad (the Martians have huge gun-like weapons). There are some foot chases, and the climactic rush to save Mom and return to Earth is tense.

This movie has a strongly positive message: that kids should value and appreciate everything their moms do for them (even if it's chores and discipline) because it's all done out of love. There are also positive take-aways about helping friends in need and the importance of being raised by a family. The motivation behind the Supervisor's tyranny is rooted in female empowerment, but along the way it stripped female Martians of the ability to have families.