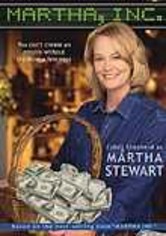 2003 PG 1h 27m DVD
Cybill Shepherd stars in this biopic of Martha Stewart, the exemplary homemaker who built an empire out of her skills after launching a magazine and wildly popular television show. Showing a side of the perfectionist Stewart most have never seen, the film follows her career from her meteoric rise to her 2003 indictment after a stock market scandal, after which she resigned as CEO of her company. Based on Christopher M. Byron's best-selling book.