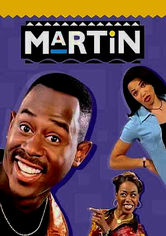 1992 NR 3 seasons
Bigmouthed radio DJ Martin Payne (Martin Lawrence) sure can talk, but his outrageous remarks keep him in hot water with girlfriend Gina (Tisha Campbell-Martin) and anyone in earshot, while his stabs at doing the right thing only pull him in deeper. Martin's ego and on-air gossip lead to all kinds of trouble, whether he's calling an exterminator (Little Richard) to catch a mouse or being chased by ex-con Mad Dog No Good (Gary Coleman).

The laughs continue as Martin Lawrence returns for a second season of his hit comedy. As the host of his own radio show, Martin should have it all figured out, but his love life with Gina (Tisha Campbell) is far from perfect. In this season, Martin delivers a baby, dreams of Hollywood and attends his high school reunion. Carl Anthony Payne II, Thomas Mikal Ford and Tichina Arnold co-star as the couple's ever-present sidekicks.

Martin and Gina (Martin Lawrence and Tisha Campbell) adjust to married life in the fourth season of the beloved 1990s sitcom, which finds the pair exploring countless ways to keep their romantic spark alive. The season, which culminates in a poignant test of Martin and Tommy's friendship, features guest stars Tracy Morgan, the Notorious B.I.G. and basketball icon Kareem Abul-Jabbar as the appropriately named Dr. Skyhook.

In the final season of the hit sitcom starring Martin Lawrence in the title role (and playing the parts of his mother, Bob the White Guy and more), he continues to juggle his roller-coaster relationship with Gina (Tisha Campbell). As the series draws to a close, Martin and Gina plan to start a family and later prepare to move to Los Angeles to further their career fortunes. Guests include Mr. T, Jackie Chan, Erik Estrada and singer Lou Rawls.