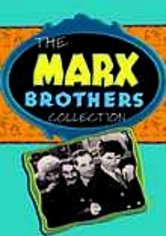 1950 NR 1h 12m DVD
Chico Marx made his debut in 1950 in the 30-minute "Papa Romani," which originally aired as a sitcom pilot (as part of the "Silver Theater" series) and co-starred Margaret Hamilton and William Frawley. The entire episode is featured here, as well as an interview with Groucho Marx from the TV program "Person to Person," hosted by Edward R. Murrow. Filmed at Groucho's home in Palm Springs, the interview looks at life inside the Marx household.