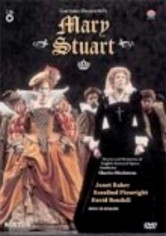 2005 NR 2h 18m DVD
This 1980s production of Gaetano Donizetti's "Mary Stuart" was a memorable occasion for the English National Opera, as it was Dame Janet Baker's farewell performance in the celebrated role of Mary, the Scottish queen. In a fitting end to a brilliant operatic stage career, Baker excels in her role, showing her range as a vocalist and actress. Playing opposite Baker is Rosalind Plowright, who also makes an impression as Mary's rival, Elizabeth.