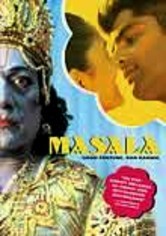 1992 NR 1h 46m DVD
Krishna has lost his entire family in a plane crash. Heading for his uncle's home, he finds himself in a strange world where old values clash with new, and where the most important Hindu God carries on a sarcastic communication with mortals via the VCR. Even worse, Krishna must deal with a group of bigots and radical Sikh terrorists -- and he must reclaim a rare stamp that's fallen into the hands of a cousin. A darkly comical film.