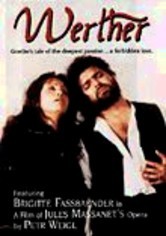 1986 NR 1h 41m DVD
First performed by the Vienna Opera in 1892, "Werther" quickly confirmed Jules Massanet was one of the greatest composers of his era. In this DVD, director Petr Weigl transforms the lyrical opera into an epic cinematic production, shot on location in Prague with music conducted by Libor Pesek. The story follows two lovers, Werther (Peter Dvorsky) and Charlotte (Brigitte Fassbaender), who are kept apart when Charlotte is promised to another.