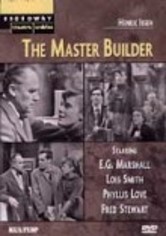 1960 NR 1h 43m DVD
The Broadway Theatre Archive presents another program in its series of televised plays from the 60s to the 80s. Famed playwright Henrik Ibsen tells the tale of a master builder in the twilight of his career who reaches for love in response to his work's demise. The production stars E.G. Marshall (Twelve Angry Men).