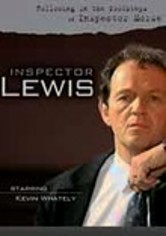 2006 NR 1h 35m DVD
Five years after the death of his partner, Inspector Morse, and two years after a family tragedy led him to take a post in the Virgin Islands, Inspector Lewis (Kevin Whately) is back in England -- knee-deep in homicide. Going straight from the airport to the murder scene, Lewis loses no time getting back into the thick of things despite his new boss's plans to reassign him. Laurence Fox plays the detective's new associate.