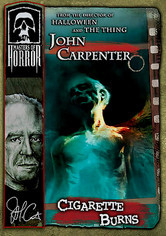 2006 NR 0h 59m DVD
Hired by a millionaire collector to retrieve the infamous Le Fin du Monde -- a violent movie that reportedly causes viewers to turn into homicidal maniacs after they watch it -- an unsuspecting theater owner begins to fall under the film's spell.