Masters of the Congo Jungle 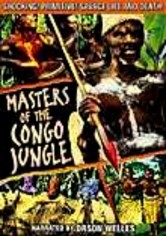 Masters of the Congo Jungle

1959 NR 1h 30m DVD
Orson Welles co-narrates this fascinating documentary exploring the culture and customs of the Congo jungle, filmed over the course of two years in the 1950s as a project of the Belgian International Scientific Foundation. The film includes illuminating scenes of elephants, lions, hippopotamuses and gorillas in action, as well as sweeping landscapes and striking tribal rituals that draw their inspiration from the natural world.