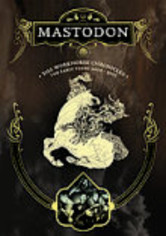 2005 NR 3h 2m DVD
Get to know the hard-rocking members of Mastodon before they became a sold-out act. In-depth interviews, live performances and handpicked footage from the band members' personal video archives give you a glimpse into the group's early career. Tracks include "Shadows That Move," "Welcoming War," "Thank You for This," "We Built This Come Death," "Hail to Fire," "Battle at Sea," "Deep Sea Creature," "Slickleg" and "Call of the Mastodon."