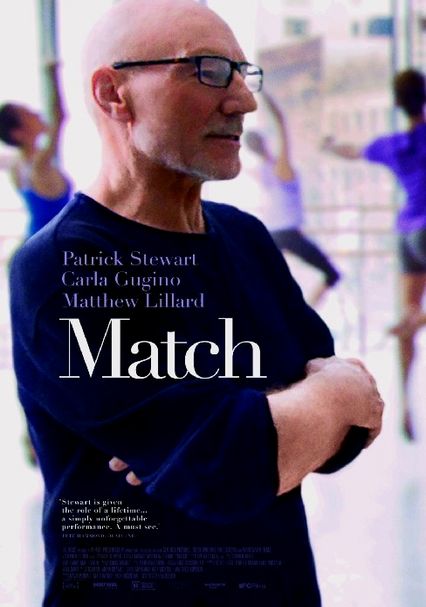 2015 R 1h 32m DVD
Patrick Stewart stars as Tobi Powell, a former dancer and aging Julliard choreographer being interviewed by a Seattle couple for a dissertation. But when their questions get too personal, the couple's hidden agenda becomes evident.

Parents need to know that Match is an indie drama about three characters who are each hiding something from one another -- including a renowned ballet instructor (Patrick Stewart), a graduate student who's interviewing him for her dissertation (Carla Gugino), and her somewhat reluctant husband (Matthew Lillard). Over the course of a long afternoon fueled by wine, whiskey, and pot, the conversation turns increasingly personal, and it becomes clear that the three strangers have a deep connection. In addition to the substance use, expect a lot of swearing (especially "f--k") and some explicit discussions about sex, including oral sex. Two men wrestle in a tense encounter.

Several discussions about sex, including a long and somewhat graphic discourse on oral sex.

A heated argument between an old man and a younger man becomes violent; the younger one wrestles the elder into submission.

The three main characters drink wine and whiskey in several scenes. They also smoke pot and engage in long discussions about what it's like to be high.