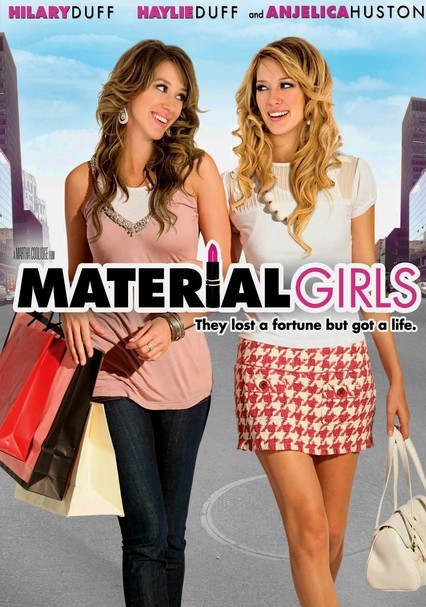 2006 PG 1h 37m DVD
As heirs to their dad's multimillion-dollar cosmetics business, Tanzie and Ava Marchetta have it made. But when an unforeseen PR fiasco strips them of their wealth, they're pushed into the real world and out of their comfort zones.

Parents need to know that Material Girls makes some strange editorial choices, such as having one of the lead characters dress like a prostitute to get information, which lands her in jail with real prostitutes. There's brief drinking, smoking, and plenty of bad attitudes. Some profanity ("s--t"). Many products are seen/showcased in the movie. The sisters' father dies, and their mother abandons them to move to Europe with an Egyptian prince (although viewers don't see this). The sisters' maid fills in as their "mom."

Tanzie dresses like a prostitute to get information; the girls dress in tight skirts and low-cut tops; flirting and kissing; provocative foot massages; on a TV soap opera, a character refers to "sleeping with your father" and taking 3 months of birth control pills to commit suicide.

The sisters' house is pelted with fruit and eggs after a scandal; they're chased by guard dogs; a corporate exec is smacked on the head with a notebook.

Mercedes Benz, Dominos Pizza, Pepsi, Rolodex, Chanel and other fashions. Hilary Duff's new perfume is handed out in a scratch-and-sniff card with the movie tickets.

Ava lights a cigarette and starts their house on fire; various characters smoke and drink; a reference to prescription drugs.