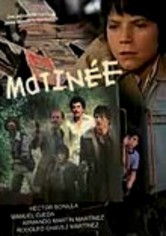 1977 NR 1h 31m DVD
Filmed in director and screenwriter Jaime Humberto Hermosillo's hometown of Aguescalientes, Matinee follows two grade-school boys -- one living far away from home and one whose father has passed away -- who join the same gang of thieves. The youngsters get caught up in the fun, but once part of the gang leaves, loyalties shift, leaving the two boys in conflicting positions. A unique coming-of-age comedy with deft narrative.