Maurice Richard: #9: The Rocket, the Man, the Legend 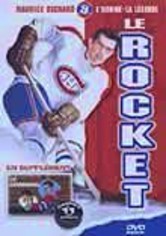 Maurice Richard: #9: The Rocket, the Man, the Legend

1998 NR 0h 52m DVD
Painting a portrait of one of the most legendary hockey heroes of all time, this documentary tells the story of Maurice "the Rocket" Richard from start to incredible finish, spanning his career with the Montreal Canadiens from 1942-60. Game footage and interviews with Richard himself add to the package. Also included is Sheldon Cohen's animated short film "The Sweater" about a boy who outgrows his sweater with Richard's number on it.