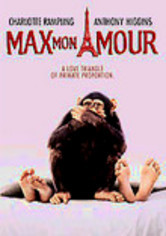 1986 NR 1h 40m DVD
When British ambassador Peter Jones (Anthony Higgins) discovers his wife, Margaret (Charlotte Rampling), is having an affair, he fears that his marriage is lost. But when he discovers that the "other man" is a circus chimp, he may just lose his mind. Directed by controversial filmmaker Nagisa Oshima, this quirky satire also stars Christopher Hovik, Victoria Abril, Anne-Marie Besse and Bernard-Pierre Donnadieu.