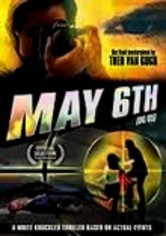 2004 NR 1h 57m DVD
In his final film before being murdered in 2004, director Theo van Gogh (a distant relative of painter Vincent van Gogh) recounts the story of flamboyant Dutch politician Pim Fortuyn, who was assassinated during his 2002 run for office. With help from his teenage daughter (Caro Lenssen), a tabloid photographer (Thijs Römer) who snapped shots of the crime scene works to uncover the conspiracy that led to the candidate's death.