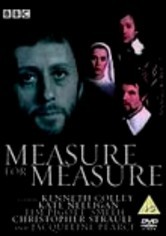 1979 NR 2h 0m DVD
When Duke Vincentio (Kenneth Colley) leaves his city under the rule of Angelo (Tim Pigott-Smith), a ruthless judge, a young man named Claudio (Christopher Strauli) finds himself sentenced to death for sexual immorality. Claudio's sister Isabella (Kate Nelligan) intervenes on his behalf, but Angelo's price for mercy tests her faith and her trust in humanity. This production is part of the BBC's series of the complete works of William Shakespeare.