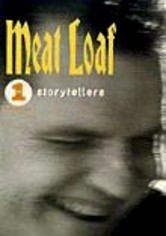 1999 NR 1h 40m DVD
Marvin Lee Aday, better known to the music world as Meat Loaf, discusses the highs and lows of his remarkable career and performs some of the songs that made him famous. In true Storytellers fashion, he tells the tales behind the music in an intimate, conversational setting. Songs include "Two Out of Three Ain't Bad," "Paradise by the Dashboard Light," "Bat Out of Hell," "I'd Do Anything for Love (But I Won't Do That)" and several others.