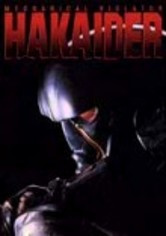 1995 NR 1h 17m DVD
Keita Amemiya's live-action sci-fi film takes place in a lawless community of the future known as Jesus Town, where the maniacal Gurjev perpetuates a senseless war, controlling the population with a cyborg enforcer named Michael. A small band of rebels discovers a second cyborg, Hakaider, who's been locked away for years. Hakaider helps the rebels free Jesus Town, but his ruthless efficiency threatens to destroy everything in his path.