Medieval Warfare: Wars of the Roses 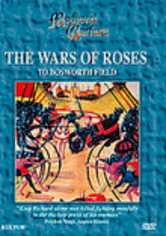 Medieval Warfare: Wars of the Roses

2007 NR 0h 50m DVD
A bitter battle for the throne of 15th-century England, the War of the Roses is often seen as the end of the medieval era and the dawn of the Renaissance. This historical documentary traces the roots of the conflict and details the major military clashes between the House of Lancaster and the House of York. Expert analysis, maps and diagrams of key engagements explain the events that eventually led to the coronation of Henry VII.