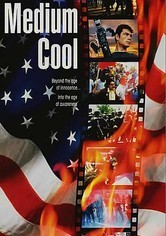 1969 R 1h 50m DVD
The 1968 Democratic National Convention in Chicago is a hotbed of political unrest and social change. Yet amid all the violence, a sensationalist television news cameraman (Robert Forster) meets a warmhearted woman (Verna Bloom) who is raising her son in a Chicago ghetto. As they fight to avoid the fear that's gripping the city and the nation, their fledgling friendship grows -- but so does the threat of danger.