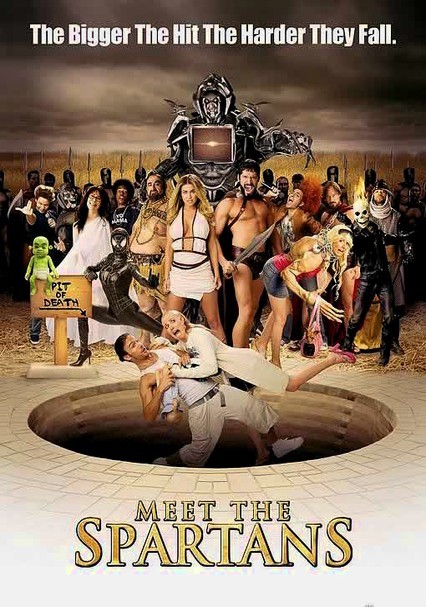 2008 UR 1h 27m Blu-ray / DVD
It's a laugh-fest of epic proportions as the Spartans of 300 battle the Persian army à la Stomp the Yard in this no-holds-barred comedy that lampoons -- among others -- Meet the Parents, Pirates of the Caribbean, Britney Spears and Lindsay Lohan. Carmen Electra, Kevin Sorbo, Greg Ellis, Diedrich Bader and Sean Maguire star in this quirky satire from the zany minds behind the Scary Movie franchise.

Parents need to know that plenty of teens will want to see this mindless spoof, even though (or perhaps because) it's riddled with gross-out humor fueled by swearing, bodily functions, offensive jokes, and cartoonish violence. Pop culture references -- and outright product placements -- are peppered throughout, too. We've seen it all before in films like Date Movie and Epic Movie, but it's possibly even less funny in Meet the Spartans.

Ample cleavage and booty shots; lots of scenes with scantily clad men and women; plenty of sexual innuendoes, many of which are somewhat homophobic (a man discusses warfare in terms of "taking it from the behind," for example); a woman licks her lips while staring at men; she also gyrates in front of older men who throw money at her; humans and animals (sometimes both) are shown in sexual positions.

Plenty of cartoonish scenes that are violent nonetheless: A dog bites a man's testicles; a parent and child head-butt each other (in the name of teaching the boy how to be a warrior); a spear lances through a soldier while another charges and hits a rock face, plucking his eyes out; guns are shot, swords are drawn, and a man cracks his neck performing a break-dance move; blood oozes out of a man's face.

The film delights in making fun of everything by playing up stereotypes or relying on crude language. A woman clearly sleeps around.

A shot of Botox kills a man. Another man drinks a beverage thinking it's hard liquor -- but it's actually pee.