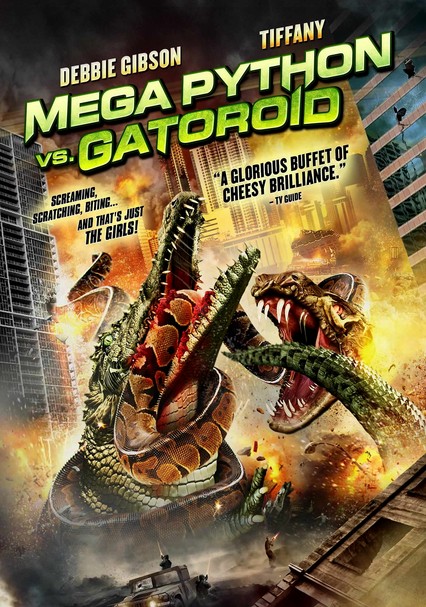 2011 NR 1h 31m Blu-ray / DVD
Gargantuan reptiles team up with 1980s pop icons Tiffany and Debbie Gibson in this Syfy Channel original movie that pits a mammoth python on the loose against an army of genetically enhanced alligators.

Parents need to know that this creature feature -- one in a series of successful TV movies made for the Syfy Channel -- contains a good deal of monster violence, with blood and body parts, although the special effects are quite terrible and the scenes often fail to convince (or frighten). Language is mild, though the women call each other "bitch" at least half a dozen times, and there's some mild sexual innuendo and drinking. Even if teens enjoyed the other monster movies in this series, this one is far too awful even to be a "so-bad-it's-good" guilty pleasure.

Some sexual innuendo (a snake-related joke about penis size), and a woman kisses her fiancé. In the climactic scene, the women wear somewhat revealing dresses.

In more than a few scenes, giant snakes and/or gators devour innocent victims with huge, single bites. There's some blood and some screaming, plus body parts and severed heads, but the special effects are fairly awful, so none of it is very convincing. Some local hunters carry and fire guns fairly often -- creatures are shot, and viewers see little splashes of blood -- and one character slices up a snake with a knife. Snakes and gators attack and kill each other, and in one scene, a dog is killed (off screen). There are also explosions and a helicopter crash.

The women call each other "bitch" at least half a dozen times. Otherwise, language is light and includes a few uses of "hell," "damn it," and "bastard."

Despite everything, the movie has a pro-environmental angle, with one character attempting to protect the wildlife; in the end, an estuary is established.

Some of the local hunters are seen swilling beer from cans while they're out hunting, and one cracks open a beer and drinks to his fallen buddy in a comical way. A hunter drinks from a flask.