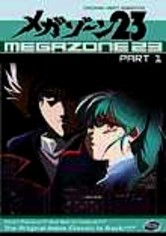 1985 NR 2 discs
A pioneer in anime, this film from the 1980s tracks the exploits of main character Shogo Yahagi as he dodges the armed forces who are after him in an attempt to ultimately save the universe. As Shogo bides his time racing the streets on his motorcycle, he's excited to find a rare model bike that's being hotly pursued by government officials. While trying to evade authorities, Shogo also discovers the dangers facing civilization in the future.