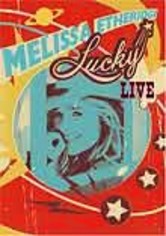 2004 NR 1h 21m DVD
This special concert performance from rocker Melissa Etheridge was recorded at the Roseland Ballroom in New York City during her 2004 "Get Lucky Tonight" Tour. It highlights the first concert footage released of Etheridge backed by a band and showcases all 13 songs from the singer's album "Lucky," including the hit single "Breathe." Bonus material includes audio commentary by Etheridge and a short documentary about the singer's life.