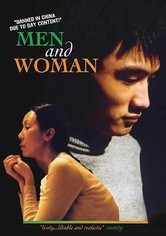 1999 NR 1h 29m DVD
Banned in China for its open portrayal of homosexuality, this daring film comically explores the issue of sexual awakenings and gender-bending identity. Xiao Bo travels from his rural village to Beijing, where he secures lodging and a job with kindly shopkeeper Mrs. Qing. She even sets him up with her best friend, Meng. But after a few dates, Meng begins to suspect that Xiao Bo is gay -- which opens a hilarious Pandora's Box of revelations.