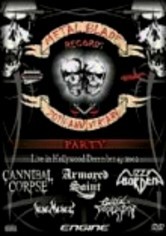 2002 NR 1h 0m DVD
In 2002, Los Angeles-based music label Metal Blade Records, known for launching major metal acts like Slayer and Metallica, rang in its 20th anniversary with a live music extravaganza at the Hollywood Palladium. This concert film captures all of the performances from the night, including appearances by Vehemence, Lizzy Borden, Cannibal Corpse and Engine, along with exclusive backstage footage, clips from the after-party and more.