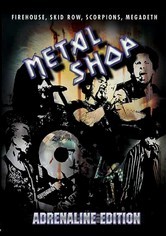 2007 NR 0h 52m DVD
Go backstage for a revealing look at some of the hottest rock bands of the 1980s. Hear from Megadeth what it's really like to be in a band, check out an uncensored interview with Firehouse and get an insider's view of being a rock star from Skid Row. You'll even join the members of the Scorpions on a sky-diving expedition in this adrenaline-fueled video program that relives the decade through music performed by some of rock's hard-core legends.