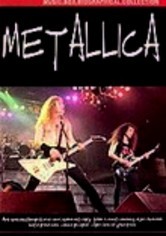 2005 NR 1h 0m DVD
From the underground clubs to the huge crossover success of the 1991 album "Metallica," this documentary chronicles the career of the most influential heavy metal band of the 1980s. Through photos, film footage and interviews, this program follows the ups and downs of the supergroup, from the tragic 1986 tour bus crash that killed bassist Cliff Burton to their mainstream transformation, their struggles with digital downloading and much more.