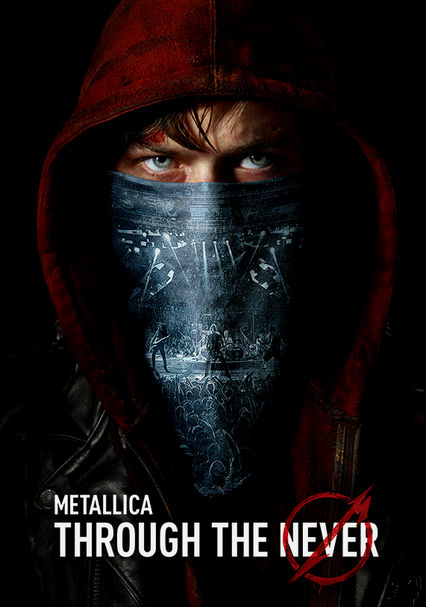 2013 R 1h 33m DVD
Veteran heavy metal band Metallica is captured live in 3D in this spectacular concert film, highlighted by a staged accident involving a crew member. Narrative bios of band members and a chronicle of Metallica's career are also featured in the movie.

Parents need to know that Metallica: Through the Never is a kind of hybrid concert movie/horror movie. The legendary heavy metal band plays several songs in front of a live audience, although several elements of the concert have been staged specifically for the cameras. Meanwhile, a roadie is sent on a mysterious errand into the city at night. Fighting, dead bodies, a car crash, blood, and a person on fire are shown, as well as additional violence and destruction. Language includes a clear use of "motherf---er" and "bitch," and Metallica's song lyrics have some language and violent images as well (though in these loud, live versions, the lyrics are frequently hard to hear clearly). The concert itself also features some disturbing images, such as video coffins with images of people struggling and screaming inside. The movie is very loud and inarguably for mature fans only, though those fans are very likely to enjoy this creative, visceral experience.

The surrounding story arc is filled with fighting, death, and blood, but even the pre-staged Metallica show includes some shocking, violent images. The stage becomes covered with a seeping red color that resembles blood. Above the stage are several coffins, upon which are TV screens showing images of people trapped inside, silently screaming to get out. There are also war images, with roaring planes and sounds of gunfire. Viewers also see a car crash and blood, many dead bodies, mob violence, a man set on fire, and, eventually, mass destruction of buildings through a huge explosive blow.

Some language is heard right at the film's beginning, including "motherf---er" and "son of a bitch." Additional uses of "f--k," plus "ass," "damn," etc. A middle finger gesture is seen. There are some profane lyrics here and there in Metallica's songs, but the lyrics aren't easy to decipher in the live show, and only fans who already know the words will pick them up.

In the overall story arc, the main character changes from being a passive observer to helping out a stranger and then finally standing up for himself and for the greater good, though this involves a lot of violence and destruction. In Metallica's music, there are often "rise above"-type messages, mixed in with lyrics about death.

Not an issue, unless you consider that teens may want to buy/download Metallica albums after seeing the movie.

The kid takes some kind of blue/orange pill, which is never explained.