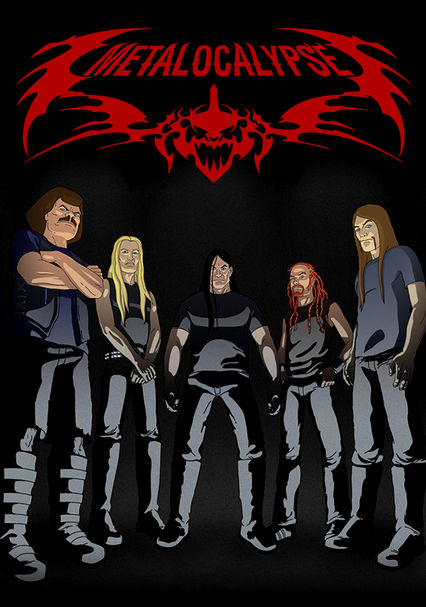 2006 TV-MA 4 seasons
This outlandish series follows the antics of Dethklok, a death metal band so successful that it's become the seventh-largest economy in the world, and its five Scandinavian members have no limits on their credit cards or rampant egos.

Death metal meets blood and guts in this animated comedy series that tracks the misadventures of a Scandinavian supergroup that's unwittingly attracted the attention of subversive world leaders.

Mega-band Dethklok continues their reign of musical destruction in Season 2. Highlights include Dethklok's dabbling in electrocutions and fashion design, a decoy version of the band and a road trip to the Amazon in search of a tribal hallucinogen.

Season 3 finds the members of Dethlock anchorless without their manager, so they relax with a little interior decorating, then decide to join their own tribute band when the devastated economy impacts even their staggering wealth.

Parents need to know that the violence depicted in this late-night cartoon (it's part of the Cartoon Network's Adult Swim line-up) is explicit. Characters are shown bleeding from their eyes, having their skin burned off by scalding-hot coffee, and getting mangled in the blades of a helicopter, among other catastrophes. The show also manages to reinforce just about every negative stereotype imaginable about long-haired, leather-clad heavy metal bands. These guys play and party hard, spend their spare time with busty women, and drink alcohol like it's water, prompting one of them to declare, "I'd rather chop off my ding-dong than not drink." Indeed.

A music video depicts a band member having sex with a voluptuous woman. Although nipples and private parts aren't shown, just about everything else is.

For starters, one of the band members is named Murderface. Other gruesome animated imagery involves people's faces being literally blown off, exposing flesh, blood, and bone. In a music video, a band member's skull is split with an ax, while another gets shot with a flaming arrow.

Dethklok isn't a band you'd want your children idolizing. Case in point: After their personal chef is caught in the blades of their private helicopter and cut into a million pieces, they put him on life support and have him stitched back together so they can write a song called "Sewn Back Together Wrong."

No specific products are hawked, but the band does agree to record a jingle for a fictitious coffee company.

Like many rock stars of their caliber, members of Dethklok drink excessively. When they go to the grocery store, they stock up on hard liquor instead of food.