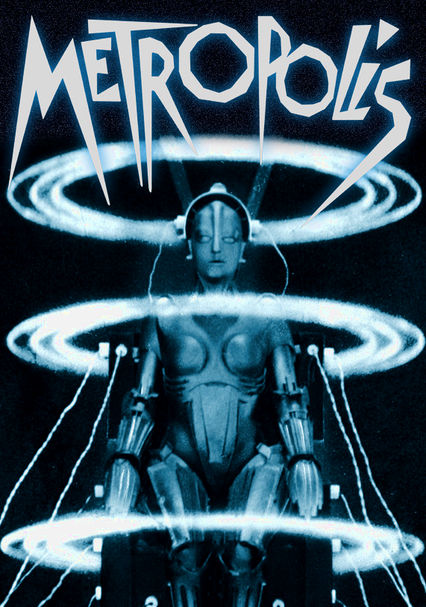 1927 NR 2h 28m DVD
In the year 2026, when the populace is divided between workers who must live underground and the wealthy, who enjoy a futuristic city of splendor, a man from the upper class abandons his privileged life to join oppressed workers in a revolt.

Parents need to know that Metropolis is a classic of silent cinema, with some of the most striking and memorable science fiction images in movie history. It contains fighting and some frightening images, plus rioting, angry mobs, and destruction, but nothing comparable to today's movie violence. There are some sexual images, including a scene of a nearly topless woman dancing, and men leering and panting at her. Some women wear see-through clothing. There's one use of "damn" and minor characters are seen smoking.

In one scene, women are gathered and chosen as amusement for the sons of the wealthy, and some of them wear see-through clothing. The hero is seen beginning to seduce one of these women. The robot double of Maria dances for men in a nightclub; she's almost topless except for pasties covering her breasts. The men pant and leer while they watch, as if she's driving them into a sexual frenzy. There's a brief drawing of a topless woman in a book. The hero and heroine kiss twice.

There are some fistfights, chases, and escapes as well as some frightening imagery. There are angry mobs rioting. A woman is chased through eerie catacombs, and there are nightmare sequences with creepy moving statues, skeletons, and skulls. Workers are injured and hauled away on stretchers, and a flood threatens to wipe out the city. A character is nearly burned at the stake.

The title cards include one use of "damn."

In this era of huge corporate profits and Wall Street protests, the movie's themes related to class and labor still seem relevant. Rather than placing blame, its idea is that the "head" (the corporations and managers) and the "body" (the workers) need a "heart" or a mediator to get them together and help them to understand one another.

Some minor characters smoke cigarettes in a background way. One character has a glass of liquor on his desk, but doesn't drink.